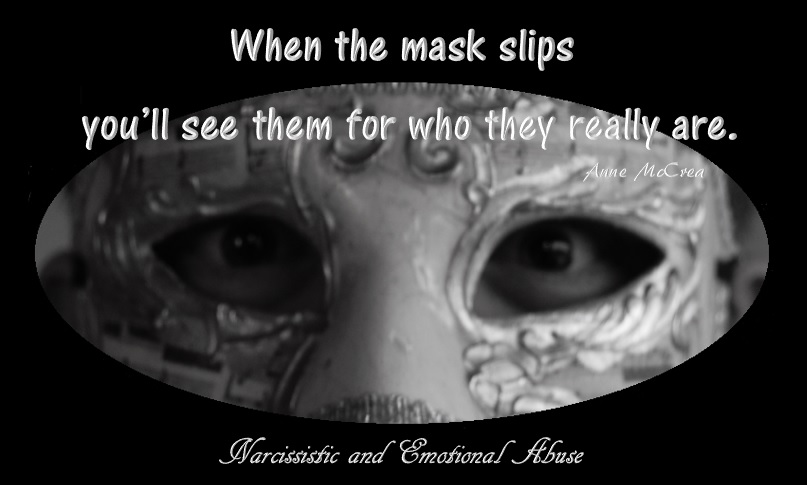 1.  Is a person who will never hold themselves accountable for anything untoward.  They will shift the blame onto others and never take responsibility for their bad behaviour.  Their failures are always someone else’s fault.  Never let someone blame you for a mistake you didn’t make.

2.  Is a person who manipulates others into behaving and thinking as they deem fit.  They cause chaos where once there was none, and pit people against each other.  They will twist words, sometimes a hint of truth brewed with lies and stirred well.

3.  Is a person who will try to isolate you from your friends and your family.  They don’t want anyone else to be the focus of your attention.  They want you all to themselves, without a support network.  By causing rifts in friendships and family, when the relationship crumbles,  who will you turn to?  In their minds they know that you will think twice about leaving if your friends and family are long gone.

4.  Is a control freak…  Someone who wants everything on their terms, no matter what the cost.  It’s their way or the highway.  Their point of view is and must be correct.  They are ruthless, often cruel in achieving their goals.

5.  Is someone who lacks empathy.  Underneath the fake exterior lies a heart as cold as ice.  They are unab 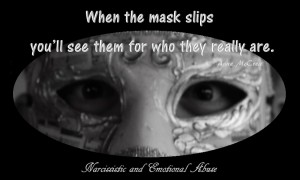 le or refuse to put themselves in another’s shoes.  They don’t care if they hurt you, their children, their parents, anyone, as long as they don’t get hurt themselves.  If someone gets hurt, that’s ok, they deserved it.

6.  Is someone who wants to keep you financially dependent on them.  If you don’t have money or an income, how can you leave?

7.  Is someone who is a pathological liar.  They are convincing and accomplished liars making up lies faster than you can question them.

8.  Is a high flyer..  Someone who will make sure they get to the top and doesn’t care who they trample on to get there.  They will lie, deceive, backstab, exploit and fake their own achievements to get the desired result.  If you happen to be in the way of their goals, don’t be surprised if your character is assassinated or you are blamed for things you did not do.

9.  Is a vindictive bully.  Someone who will gossip, lie and slander their target without mercy.

10. Is someone with low self esteem.  Despite what they often portray, someone who is full of self-confidence, this is someone  who is extremely jealous of your popularity.  They will take on your mannerisms to become just like you while destroying your reputation in the process.

11.  Is someone who appears to be very charismatic when you meet them initially.  The longer you know a narcissist, the less likely you are to be fooled by that false persona.

12.  Is someone who has promised you the world but fails to deliver.  Their promises mean nothing.  They will promise anything to ensure their demands are met.  Once they achieve what they set out to achieve, they will deny ever having made them.

13.  Is someone who fears abandonment.  By doing so, they will reject first to put themselves in control of the situation.

14.  Is someone who will refuse to acknowledge your very existence as a result of some perceived slight in order to gain power and control.  The silent treatment is one of the most severe forms of emotional abuse causing the target to doubt their self worth, often described as mental murder.

15.  Is someone who lacks self control.  A narcissist will  often overreact and display uncontrollable rage not unlike childish tantrums one would expect to see from a five year old child.  Their rage may be fuelled by something as little as a contrary view point.

16.  Is someone who needs to be admired… Their puffed up self-image needs feeding.  A narcissist needs admiration and attention like a drug addict needs supply.

17.  Is someone who will push you to your limits to get a reaction.  When you react they will try to make you appear out of control and they play the victim card.

18.  Is some one who believes that the rules don’t apply to them.  They are risk takers believing that they are above the law and won’t get caught.

19.  Is someone who is arrogant, thriving off the admiration of others.  They will flaunt their wealth, their accomplishments, real or imagined, in order to boost their fragile ego.

20.  Is someone who is lacking in morality yet will be the first to judge the moral standards of others.

21.  Is someone who will never be satisfied.  They will become bored and want more.  The perfect, wife, husband, children, house…. None of it will ever be enough.

22.  Is someone who is highly reactive to the slightest form of criticism.

23.  Is someone who projects onto others behaviours that they can’t or won’t accept in themselves.  A narcissist has a strong desire to conceal their weaknesses and  not face up to their own inadequacies.

24.  Is someone who may apologise but unless there is something in it for them, the apology is just empty words which means nothing.

25.  Is someone who may promise to change their behaviour which is basically changing who they are, their very personality…  The question must be… Is that possible?

A true narcissist will put a tremendous amount of effort into the creation of an effigy,  which when viewed by others signifies something wholesomely good,  a beacon to draw attention.  In reality this closely resembles the moth to the flame.
Written by Anne McCrea

183 thoughts on “Underneath The Mask of a Narcissist”