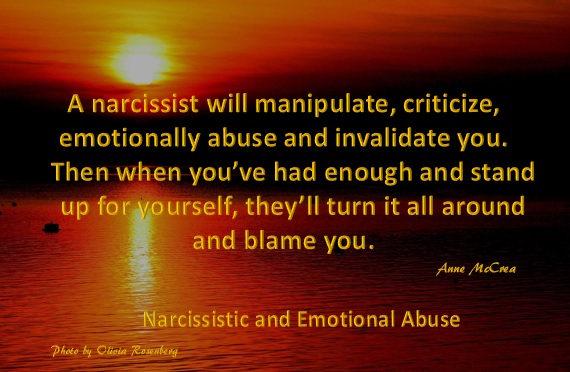 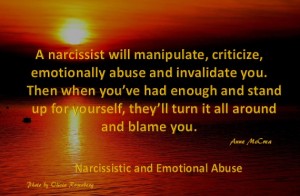 Narcissistic Personality Disorder is a pattern of deviant behaviour which is abnormal and considered unacceptable by society in general. People with NPD often come across as arrogant and conceited with a tendency to look down on others who they perceive as inferior. A narcissist often displays a sense of entitlement demanding admiration and special treatment. When they don’t receive such treatment, they may become impatient and angry. Underneath the narcissist’s outward portrayal of confidence and superiority, there are often deep seated insecurities and self loathing where they know that they don’t quite match up to that image of perfection. As a result, they will not respond well to any perceived criticism and often react with rage.Narcissists are renowned for having problematic relationships. Their main focus is on themselves, their wants and their needs. They are self centred and egotistical and like to be the focus of attention. The needs of those around them are not really their concern. The narcissist often appears to be charming to those who don’t really know them and by that I mean, those who don’t live with them, work with them or have known them for a relatively short period of time. The longer you know a narcissist, the more apparent their unacceptable behaviour becomes. They will ignore, denigrate and slander others in order to boost their own position and boost their insatiable ego.A very common trait of the narcissist is a complete lack of empathy. They either cannot or will not put themselves in someone else’s shoes or try to understand someone else’s pain or distress. They use people for their own ends, to get what they want, when they want with no regard for anyone else’s feelings or who gets hurt in the process.Their envy speaks for itself. They don’t like to see others who are more popular, doing better, making more money or being happier than they are themselves. Their envy often results in a smear campaign where the narcissist will lie and gossip in an effort to destroy the other person’s reputation.The Mayo Clinic (Nov, 2014) states that ‘Many experts use the criteria in the Diagnostic and Statistical Manual of Mental Disorders (DSM-5), published by the American Psychiatric Association, to diagnose mental conditions. This manual is also used by insurance companies to reimburse for treatment.DSM-5 criteria for narcissistic personality disorder include these features:

Diagnosis is by trained mental health professionals.  To be diagnosed with the rather unflattering label of narcissistic personality disorder, one must possess at least five of the traits mentioned.

It is not known what causes NPD. However there are many theories which include:

The cause is most likely complex with the possibility of more than one factor being at the root of this disorder.

For a narcissist to seek help, they need to see that the problems lie within themselves.

Unfortunately, narcissists rarely blame themselves when things go wrong. They do not hold themselves accountable and they will shift the blame onto others for the very things that they do themselves.

Many experts will say that a narcissist is most likely to seek help when they have hit rock bottom, perhaps when they have been abandoned by a long time partner or other family members.

This question appears to be open to debate. Pathological narcissism is a difficult disorder to treat. Recovery from NPD would be a lengthy process requiring the individual to remain in therapy for a considerable length of time.

Will a narcissist remain in therapy for as long as is required?

Will a narcissist acknowledge their therapist’s expertise?

I have known and read about narcissists in recovery over the short term. Some narcissists that I have spoken to will say that they have difficulty maintaining a change in their behaviour for considerable periods of time and tend to slip back into their old ways.

Some experts have gone out on a limb saying that they believe change is possible whilst others disagree believing long term change is extremely unlikely if not impossible.