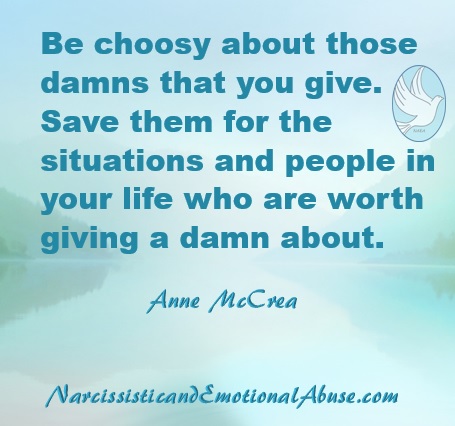 It took me a long time to get to a point in my life where I no longer give a damn what people think. The less I give a damn, the better my life becomes. From now on, I’ll do what I believe is right. My conscience is clear.

People like to be liked. They try to please other people often disregarding their own wants, needs and feelings. They go all out to please someone who may never even notice their efforts. They may get a pat on the back if they’re lucky. On the other hand, the more you do for some people, the more they expect. Yes, it’s nice to be nice but we have to know when to draw the line. We have to realize that it really doesn’t matter what anyone else thinks.  What matters is that YOU know in your heart you’re doing the right thing

There will always be those who try to find fault where none exists. Let them.

There will be those who are looking to be offended. Let them be offended. These are their problems, not yours.

There are some who will be angry with you for what you’re doing. Let them. Do it anyway if you know it’s right.

There will always be people whose lives are so boring that they can’t keep their nose out of everyone’s business. Pay no heed.

Some people have nothing better to do with their time than cause upset and frustration to those around them. Their behaviour says a lot about them. Distance yourself.

Some people will be green with envy and jealousy. They’ve got issues they need to address. Let them go.

There will always be liars and people who try to put you down. You don’t need them in your life. In time, the liars get caught out in their lies and those, who believed all that s**t, well, you’re better off without them.

As time passes, you’re circle may get smaller as you weed out these people who never had your back in the first place. You can replace these degenerates with honest, reliable folk who have the same values and morals as you do. You’ll see that the people’s opinions you once cared about are long gone.

Be choosy about those damns that you give. Save them for the situations and people in your life who are worth giving a damn about.