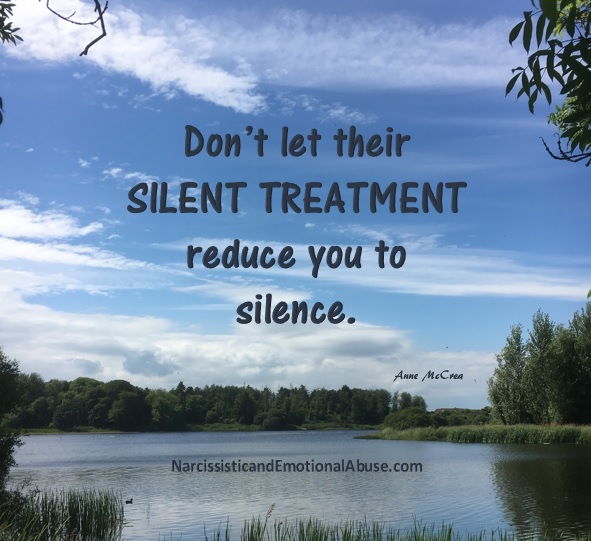 THE SOUND OF SILENCE

A narcissist’s silent treatment is one of their favourite games of mind control.  It is a passive-aggressive form of emotional abuse.  Those who have never been subjected to this form of abuse will find it difficult to understand the utter devastation caused by what is sometimes known as mental murder.  The narcissist will deliberately ignore their target in order to cause harm, often encouraging others to do the same (Ostracism).  The person who is being ignored or ostracised is left feeling worthless with their self esteem lying somewhere in the gutter.

The narcissist will express their disapproval by shutting down, withdrawing any love or affection, refusing to communicate and denying their target any explanation.  Why?  Avoidance, control, disempowerment and / or punishment, punishment for some perceived slight that their target is completely unaware of.  They know how they are making the other person feel but in their sick and twisted mind, they believe they deserve it.  Their emotional maturity is typical of a five year old child who sulks and storms off until they get what they want.  The victim often reaches out to the abuser in an attempt to resolve the situation.  Their phone calls will go unanswered, their emails or texts will be ignored.  All attempts at communication are met with contempt and a deafening silence.  This passive aggressive behaviour is usually a repetitive form of emotional abuse which the narcissist will practice time and time again with each episode of silence often lasting a little longer than the one before.  This is intentional manipulation which conditions the target for future mind control. 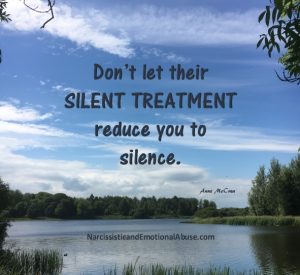 They don’t know if or when their voice will be heard and they will once again be graced with a response or if some degree of ‘normality’ will be restored.

Below are some questions I put to a narcissist  regarding the silent treatment.

Q.  Why would you, as a narcissist, invoke the silent treatment on  a partner or loved one?
A.  They’ve brought it on themselves.  If they have stopped making me the centre of their attention, I can bring the focus back to me by ignoring them.  They’ll be so hurt and annoyed that they’re being ignored that they’ll grovel and beg and do anything to get my attention.  If they’ve done something that annoys me, it’s a good way of pulling them back into line.
Q. Back into line… That statement certainly makes it sound like you think that you should always be in charge, that you should always hold the reins.  Is there ever a time when you can see someone as your equal?
A.  No. I am the boss.  If they want to be with me, they need to know that.
Q.  The silent treatment has been described as mental murder due to the severe emotional trauma felt by the victim.  How can you justify making someone feel totally worthless, as if they don’t matter?
A.  It doesn’t matter to me how they feel as long as they learn their lesson.
Q.  How do you react when your tactics don’t go to plan and your target ignores you right back and doesn’t come running back to you?
A.  That doesn’t usually happen.
Q.  What if it did?  What would you do?
A.  If they were worth keeping, I’d bide my time and gradually draw them back to me.
Q.  How?
A.  By being charming and irresistible again.
Q.  Is it something you do a lot?
A.  Yes, ‘ cos it works.
The narcissist is a cold, empty human being who will show absolutely no remorse or sympathy for the pain and distress that they are causing their victim. To the outside world their behaviour will appear normal. They appear to be in good spirits, calm and in control.  No one would ever believe the person they think they know could act in such a cold and callous manner.  They often portray themselves as the victim whilst the real victim of this dysfunctional relationship gradually becomes a shell of their former selves.  People who they thought were their friends have sided with the abusive personality.  They find themselves rejected by not only the narcissist, but by the narcissist’s family members, friends or colleagues. It’s a very lonely place to be.  The real victim withdraws, doesn’t know who they can trust any more and becomes isolated.  Sometimes they’ll react and who can blame them?  They have been pushed to the edge and they’ve done nothing wrong.  Bam!  The narcissist has all the evidence they need.  Their victim has just shown everyone  how crazy they are.  The abuser has gained sympathy and the victim has shown just how ‘unbalanced’ they really are.
As the victim’s mental health slowly deteriorates, the narcissist knows that they could put an end to this needless suffering at any time.  They don’t.  They often enjoy seeing the results of their monstrous behaviour and its profound effects on their helpless victim.
When does the silence come to an end?  When the narcissist sees fit.  When the target has been punished enough.  When they’ve paid their dues some semblance of normality will return until the next time.  The victim is so delighted that the period of silence has been lifted that they don’t ask why or what happened.  They don’t want to invoke the narcissist’s wrath so they let it slide.  Each and every time someone is subjected to this abhorrent treatment, they become less of the person that they once were.  Their self esteem gets pulled down further and further until they are not a patch on the person they once were.
In the majority of cases this type of abuse is covert and is rarely witnessed by anyone outside the loop. It is considered a very dangerous form of abuse which no one should tolerate.  If you find yourself being treated in this manner, understand that this is not normal behaviour.  People who play these mind games are mentally unstable, full of self hate and are incapable of maintaining healthy, loving relationships.
No one deserves to be treated in this manner by any one.
Written by Anne McCrea

102 thoughts on “The Silent Treatment”