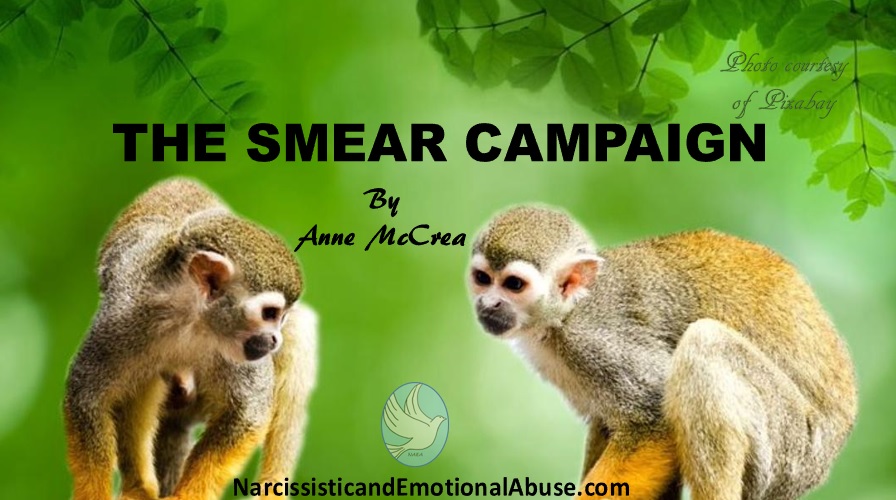 THE NARCISSIST’S SMEAR CAMPAIGN
‘The smear campaign is an orchestrated series of lies and misinformation initiated by toxic people as a method of damage control in the event of them being exposed.’
Anne McCrea
Narcissists use a calculated (and effective) series of lies and gossip to deliberately bring their target down and make themselves look good.  Why? There can be many reasons such as you seeing them for who they really are, to discredit you should you decide to expose them, jealously, a relationship coming to an end, not giving the narcissist enough attention or a simple disagreement.  The target of a smear campaign often finds themselves isolated and / or ostracised by family and people who they once thought of as friends.
By the time the victim finds out about the back stabbing and betrayal, it’s too late, the damage has been done. No one believes them.  Their credibility has been undermined, their reputation assassinated.  The narcissist has painted a dark picture of their target and any denials only add fuel to the narcissist’s version of events.
The narcissist often starts a smear campaign long before a relationship comes to an end.  They plan ahead knowing that none of their relationships end well, so when that time comes, they have already persuaded friends and basically anyone who will listen to them, that their target is unstable. They lie, spread malicious gossip and twist the truth in an effort to destroy their victim’s reputation.  Abusers often use other people to do their dirty work for them.  They will use third parties to abuse their target.  Because this form of abuse is indirect, it results in them looking like an innocent party. Maintaining their image is paramount.  They’ve done this before and are well practised in manipulating and controlling people. Practice makes perfect and sadly they are often believed.
Smear campaigns are often initiated within the family unit.  The narcissist alienates their target from family members once again by lies and gossip.  The narcissist recruits family members, (who become enablers) to help ostracise their victim. 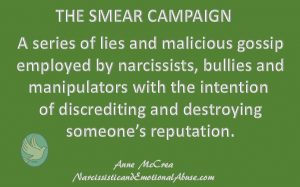 Anyone who is seen as a threat to a narcissistic personality within the workplace may be considered a target. Simply being more popular than the narcissist is enough to make you a target of a workplace smear campaign. The victim in these circumstances may find themselves being bullied, isolated or ostracised by their work colleagues.  They may find themselves being blamed for failures, poor performance or inadequacies, none of which they’re guilty of.
‘You may hear stories about me.  They’ll tell you what they want you to know, but they’ll leave out what they did.  There was a time that I was good to those people, but they don’t want you to know that.’

Make no mistake, the narcissist knows their target is a good person.  They know exactly how they are making their target feel by their betrayal.  They simply don’t care as long as they, themselves, come out of the situation smelling of roses.  Some will take great pleasure and feel a sense of power by simply knowing that they are the cause of another’s pain and emotional distress.  By their manipulation, they are in control of their target’s emotions and of their relationships with others.  They display absolutely no remorse or shame in the psychological harm and trauma that they cause to their victim, unless of course, they are caught.

24 thoughts on “The Smear Campaign”